Free Shipping to Australia when you spend over $100! 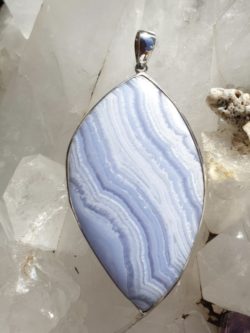 Known as the ‘Gem of Ecology, The Earth Rainbow’, Blue lace agate is considered as one of the optimum agates in the world. Blue Lace Agate is known as a mild, soothing stone that stimulates stillness and refinement it conveys harmony, diminishing anger. Use it to calm anxiety, we love it for that. The Chalcedony within gives a calming 'spiritual' energy to the stone, while the agate offers an 'earthly' feel or aspect to this magnificent stone.

A variety of Quartz of the Chalcedony family of agate.

Physical:
This lace agate is considered as a mineral of communication by relieving the inconsiderate boundary of any communication, especially during difficult times; improves public speaking, and provide an even discussion.
Blue Lace Agate also promotes tactfulness, especially for written and speech skills.
It also assists to relieve headaches, arthritis, joints, and bones, nervousness, stomach pain, and any digestive issues and other immune system issues because its calming affects still the energy flow within.
Agate is considered as a “Stone of the Diplomat”, assisting communication were angry words should be avoided and plain understanding is quite needed.

Emotional:
Agate is excellent gem for stabilizing physical, emotional, and intellectual power.
The activation of yin and yang, the optimistic and pessimistic forces of the universe while also motivating loyalty and honesty. A sustainable mineral for all caregivers, soothing stress-related conditions, and conquering difficulty in communication. Therefore carrying Blue Lace Agate can be an effective one to articulate your emotions without getting distressed.
Blue Lace Agate also neutralizes the domination and control of feelings caused by past rejections, fears, and judgments assisting to eliminate the old blockage patterns and indecision, and allows new methods of articulateness and development.
It allows an individual appreciate their feelings and sensitivities.

Spiritual:
It is a mineral that offers happiness, and pleasant energies as it brings, hope, useful for refinement, journeying within upper spiritual planes, which becomes a channel for communicating with spirit and guides.
It stimulates inspiration and assists in calm deliberation of lifes dreams and as an emotion, this brings to the fore the manifestations you seek.
It also places a high emphasis on the feeling of Divine of truth, conveys fortification, stillness and encouragement.

20% Off Your First Order

A newsletter dedicated to community and crystals.